Some local people complain that the preparations for Formula E on June 27 & 28 are spoiling their enjoyment of Battersea Park.

Rex Osborn, leader of Wandsworth Labour group says: “We welcome a world class event here on our doorsteps, but Formula E need to make it easier for local people to cope. There needs to be more information and more helpful stewards, otherwise Formula E is in danger of losing local support.” END_OF_DOCUMENT_TOKEN_TO_BE_REPLACED

The Labour Party has sent out a booklet to members called ‘Labour: A Year In Review’. It makes clear that Wandsworth is at the centre of national politics. 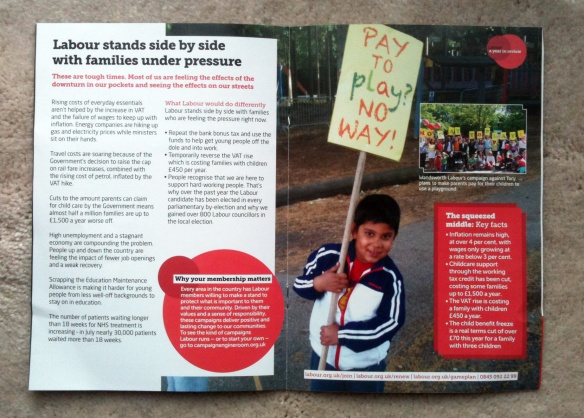 END_OF_DOCUMENT_TOKEN_TO_BE_REPLACED

The Wandsworth Guardian’s front page story states: “All three of the borough’s adventure playgrounds and two children’s clubs could face the axe as Wandsworth Council struggles to slash £30m from next year’s budget.

“Playgrounds in Battersea Park, York Gardens and Kimber Road Gardens are all under threat.”

It is amazing that the council has not learned from the extraordinary public response to Wandsworth council’s plans to charge children £2.50 to play in Battersea Park Adventure Playground (see the national coverage round-up on WeSayNoPay2Play, which I also edit).

In response to the reports, Women of Wandsworth, a group of local volunteer moms, have updated a video of their inspiring campaign to keep our playgrounds free which forced the council into its original U-turn – well worth watching.