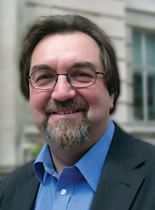 It’s a real pleasure to say a few words about my friend Rex Osborn.

Rex was leader of Wandsworth Labour Group and a councillor for Graveney ward.

I once asked Rex about why his ward was called ‘Graveney’.

Several minutes later he concluded: “…Richard de Gravenel’s widow Alice held his lands in dower until 1229 and the unnamed heirs of Gravenel were returned as tenants of his Tooting manor in the reign of Henry III.”

His Labour contacts also come in handy. He was recently guiding a group of tourists in Westminster, near the Abbey I think. The American tourists were surprised as the Mayor of London appears and warmly greets their tour guide. Sadiq advises them: “This is the best tour guide in London. Make sure you give him a big tip!” Former Wandsworth councillors looking after each other.

Rex’s other day job was for the Labour Party. He commissioned polls and focus groups. When I took over as leader I found a note on my desk in the office from him. It revealed that focus groups of local people say that they like the low council tax, see Labour as too left-wing and Tory council as too harsh – but we can win the next election.

I thought that’s good to have fresh insight. Great hand-over. We can really make some progress. But then I thought it was odd he’d typed it out on a piece of paper. So I looked at the date on the document – it was from 28 years ago!

The more things change the more they stay the same… Staying power is important as a Wandsworth Labour councillor.

Rex is kind and he’s funny – and he’s also a very successful leader of Wandsworth Labour. He’s seen the group increase from just 9 members a decade ago. Rex in many important ways laid the foundation for the 2018 election where we won the popular vote and now have 26 excellent councillors.

I’m grateful that he tolerated me as an awkward, inexperienced young councillor. Rex was always generous with his time and was an inspiration to me as his deputy. The point of leadership is not to create followers, it’s to create more leaders.

He knows the Labour Party is a team effort or it’s nothing.

So I’ll finish with a poem that he used to quote to MPs that he advised in the 1980s & 90s and quoted to Wandsworth Labour Councillors when things got tough.

It’s a poem about comradeship and teamwork by Rudyard Kipling and it goes:

That’s what Rex Osborn believes about politics – and about life. And he’s right. I’d like to thank him on behalf of local people for his many years of top-class service.

1 thought on “‘The strength of the wolf is the pack’: Rex Osborn honoured for his council service”