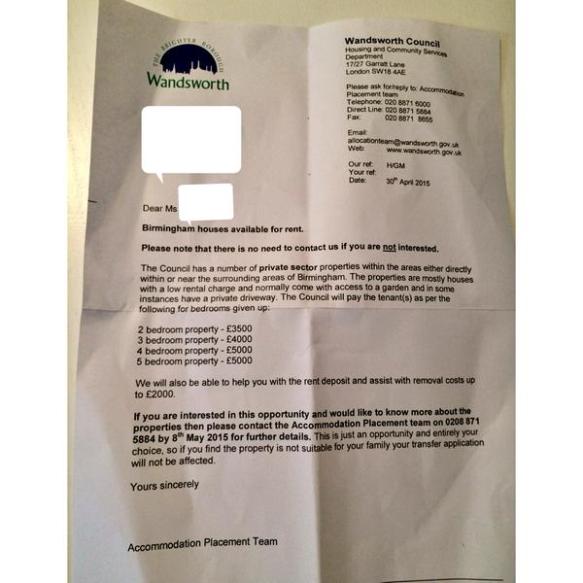 Last week a distressed woman knocked on Will Martindale’s door to show him a letter. Martindale, then Battersea’s Labour MP candidate, said: “She was really upset. The council is her landlord and she trusts them. How would you feel if you got a letter like this from your landlord?”

The letter from Wandsworth Council offered a cash payment if she gave up her secure council tenancy and moved to a private rented home more than 100 miles away in Birmingham. The council has since admitted the letter was sent to more than 1,000 tenants.

Martindale added: “This policy will just widen the divisions we see in our local community. Our borough is being hollowed out by inequality. Over the past two years, every income group has shrunk except for the extremes: those earning less than £15,000 a year and those earning more than £70,000 a year.”

Sadiq Khan, Tooting MP,  told the Evening Standard: “Wandsworth council have been caught bribing residents to move to Birmingham. These policies rip communities apart and amount to the social cleansing of London.”

I told the Guardian: “It’s wrong to pressure local families to leave Battersea to move to Birmingham. The real answer is to build more homes local people can afford to rent and buy. These really are some of our most vulnerable tenants, you can either help them improve their lives or you can try and ship them out of the area and get some different people in.”

Wandsworth council has recently been criticised for moving homeless families as far away as Portsmouth and Leicester. Sandwell Council’s leader condemned Wandsworth for  treating homeless people ‘like cattle’ and moving them around the country to cut costs

Wandsworth council defended its policy to encourage council tenants to move out, saying it had been in place for many years and that other London boroughs had similar policies. This is misleading: the above letter is part of a new, more aggressive policy to move out council tenants. Wandsworth has increased the budget for “under-occupation” moves from £214,000 per year to £1m, hired extra staff and set a target to move 600 tenants in the next three years – triple the previous level.

A council spokesperson said: “What this does is provide choices and incentives for tenants in larger properties to hand them back so that they can be used to provide new social-rented homes for families on waiting lists who may be living in overcrowded conditions and need a bigger property. Offering a financial incentive is one of the ways in which tenants who don’t need such big homes can be encouraged to give them up.”

Press coverage of this issue

Wandsworth accused of offering £7,000 ‘bribes’ to get people to move to Birmingham – Evening Standard