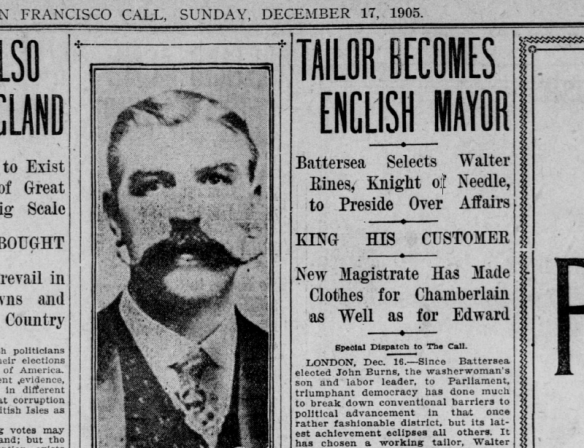 to Preside Over Affairs

LONDON, Dec. 16. 1905 — Since Battersea elected John Burns, the washerwoman’s son and labor leader, to Parliament, triumphant democracy has done much to break down conventional barriers to political advancement in that once rather fashionable district, but its latest achievement eclipses all others.

It has chosen a working tailor, Walter Rines, as its Mayor and chief citizen for 1906. Mayor Rines claims to be the first knight of the needle who has ever attained to such high civic dignity In the municipal history of Great Britain, and his fellow craftsmen throughout the country; are proud of the distinction which his election confers upon them.

When congratulating Rines upon his success, John Burns said that if Battersea possessed a chimney sweep of the right stamp who would pledge his support to democracy they would elect him Mayor of Battersea for 1907.

Although Mayor Rines is a militant democrat in politics, he is an aristocrat in his trade and one would not be surprised to learn that both the King and Joseph Chamberlain had congratulated him on his new won honor, for in his time he has caused both of them to be regarded as the best dressed men in England.

“I have often,” he said, “helped to transform Mr Chamberlain into a model of sartorial – perfection, despite the difficulties which his figure offers, but that was before he became a political turncoat.”

Like most workingmen who have risen to prominence and positions of trust among their fellows, the tailor-Mayor has had his share of hard times. He has tramped hundreds of miles in search of work and has often been “dead broke.”

He tells a pathetic story of having once had his pocket picked of the money he had saved to pay his railway fare from Manchester to London, whither he was going in search of employment, and in consequence he had to walk the entire distance, which took him a week.

He no longer makes clothes for the King, but is prouder of the fact that he is responsible for the blue Berge reefer suits of the “Battersea pet,” as John Burns is familiarly called.

As Mayor of Battersea he draws no pay and is proud of this, too, because it shows he has not sought the post for the sake of what he gets out of it. He Is now 40 years old, and despite his sedentary employment enjoys robust health, which he attributes in no small degree to the fact that he has always been a temperate man.

He has two brothers in New York who are engaged In evangelistic work there, while a third Is doing his best to make converts among the miners of Montana.