From the archives: The BBC reported live from Battersea Park Adventure Playground twice on May 12, 2011.

The presenter introduced the coverage: “Recent figures show violent youth crime is falling in the capital, but could council cuts jeopardise that? Many projects which work with young people are having their grants cuts. Matt Cook is in Battersea for us tonight… ”

One local mother (below) told the BBC: “There’s a lot of cuts going on, so I can see why they would need to do it, but I don’t think it is right, but not everyone can afford to pay.” 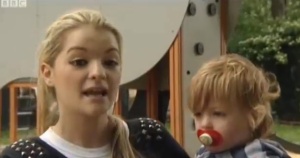